Yurts: For Your Next Vacation

A Family Vacation In  Yurts ? Yes This is possible

When planning a camping trip, you might not generally consider staying in a yurt, but we’re here to suggest that you consider it. These yurts are constructed using age-old methods that have been passed down through generations of nomadic tribes, and they fall somewhere between a tent and a prefab cottage. They might simply be the unsung hero of outdoor accommodations because they are portable, built to withstand harsh weather, and large. Therefore, rather than asking “Why,” we should ask “Why not?” 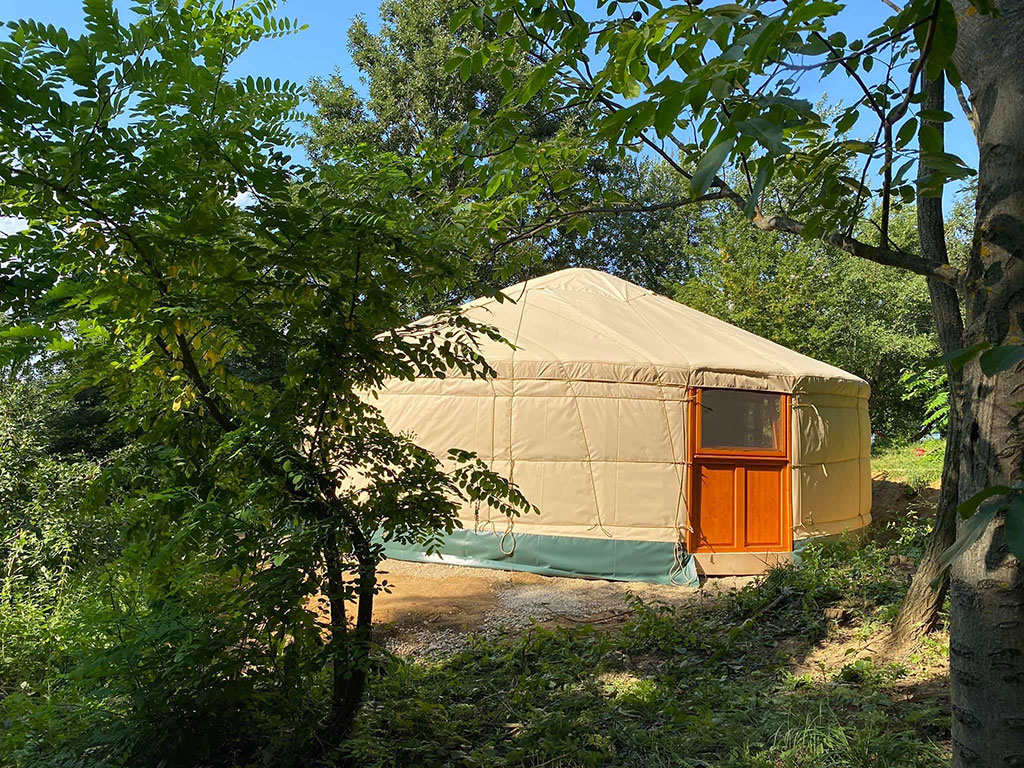 We go into the yurt’s history, and construction, and even suggest a company to help you get started on your own yurt experience below. Dive in and relish!

What is a Yurt?

The ancient equivalent of a tent is a yurt. Historically, nomadic tribes in Central Asia employed them, and they were made to be simple to disassemble when a community wanted to relocate. One of the earliest forms of housing still in use today, just with minor variations, is the yurt.

Yurts are circular buildings that are put together similar to a tent. They are strong shelters that perform well in severe weather. These buildings are typically made entirely of natural materials, hence their construction has a low environmental impact. A yurt’s round shape also offers the maximum interior area in relation to the quantity of building supplies utilized to create it.Even though they are typically used as shelters, people successfully transform them into contemporary workplaces, eateries, and glamping locations. For those fascinated by yurt living, yurts are becoming more and more common as compact dwellings. For people who desire to try yurt camping, certain national parks and campgrounds offer yurt rentals. They are frequently utilized by retreat centers and in spiritual rituals like lodges to get people closer to the land.

Yurts were originally utilized by nomadic people on the entire Eurasian Steppe, which stretches from Hungary to China. They have been utilized by people for up to three thousand years. The yurt structure is known by various names in various civilizations. For instance, this type of building is referred to as a “ger” in Mongolia whereas it is termed a “yurta” in Russia.

Despite the go by different names in different cultures, the words’ English translations of “home,” “homeland,” and “kinsman” all convey the same concept. These buildings are so related to the nomadic people who once resided there that the name “nomad” itself was derived from them. The word “felt,” which was used to cover the building, is where the word “nomad” first appeared. So-called “feeling people” were nomads or yurt dwellers.

Perhaps the most recognizable aspect of Mongolian nomads is their round tent. The Mongolian ruler Genghis Khan even ran his empire while residing in a huge yurt. Yurts are still widely used as dwellings by Mongolians nowadays. In fact, approximately 90% of individuals living in rural areas and about 61% of people in Ulaanbaatar, the capital of Mongolia, live in gers.

How is the yurt built?

A wooden door frame and a flexible wooden frame wrapped in wool felt are features of traditional yurts. Lattice structures are made from numerous flexible wooden poles that are joined and weaved together from wood, willow, poplar, or bamboo. The poles were traditionally bound together by nomads using leather or animal hair. Frequently, the lattice is divided into parts by rows of interconnected, foldable wooden poles. Every part is referred to as a khana.

The cloth is spread over the frame once it has been constructed. Modern covers for yurts include cloth and canvas, as compared to the wool felt or animal hides used in traditional yurts that were covered with waterproof material. Wool that has been pressed together rather than woven produces felt, a material that is a good material. You might boost the insulation to guard against outside temperatures by adding more felt layers.

Yurts come in a variety of sizes, but typically have panels that are about six feet high and a domed roof that adds another three feet or so to the overall height of the building. Despite the fact that bunk beds are frequently seen in camping yurts, the size of a wooden yurt makes it possible to fit in normal-sized beds.In the middle of the living area of traditional yurts is a furniture stove with a chimney that extends through a hole in the top. The crown is the main component of the roof. The length of the family’s history is indicated by the number of smoke stains the traditional Mongolian yurt’s crown has. The crown is slightly open, which allows air to circulate. When the yurt tent is assembled, the additional roof poles are spiral beams joined to this circular construction. Bagana poles can be used to hold the crown, particularly in bigger yurts.

Yurts without bagana are self-supporting, held each other by the ropes used to connect the poles together and compression created by the heaviness of the felt cover. A weight suspended from the center of the roof could help compress the cover.

Yurts are often classified into two types: solid wood yurts and Mongolian gers. The roofs of Mongolian gers are made of vertical poles that are linked to the crown. The ceiling of these yurts is gently slanted.

The roofs of solid wood yurts are composed of, well, bent wood. The roof’s timber poles are heated and bent before being joined to the crown. They also reach down to form a portion of the walls. This results in a taller, sharper, almost spherical roof on solid wood yurts. Turkic yurts are another name for these sorts of yurts.

In North America, there are three varieties of modern yurts: the conventional canvas yurt, the curved wall yurt, and a framed panels yurt. The cloth yurt is movable and is occasionally available as a yurt kit.

Why are yurts so famous among campers?

When you go camping, a yurt is a great alternative to a tent. They are made to be transported easily since nomadic people have utilised them throughout history. But don’t anticipate a yurt to be as little as a tent. Unlike yurts, which are intended to be residences and gathering spaces for a community, tents are designed especially for use while camping. So, when you go yurt camping, a yurt offers additional room and comfort-creating possibilities. They may accommodate more amenities and are often larger than tents.

If you intend to set up your own yurt, you most likely won’t need to transport anything, including your kitchen sink. However, it’s beneficial to know that you could if you so desired. In comparison to a cabin or motel, more durable camping yurts can provide a luxurious camping experience while yet keeping you connected to the natural world. The glamping world is embracing these kinds of yurts more and more.

The number of rooms, beds, baths, kitchens and even electrical outlets that can be included in a yurt depends on its size. If you wish to camp with a big group of people, yurts are the perfect option because some of them can comfortably sleep five to fifteen people.

Setting up a yurt might take anywhere from 30 minutes to 3 hours. This is depending on the size of the yurt and the help available. The majority of contemporary portable yurts may be set up or taken down in about an hour. Even if it does look a lot longer than a typical camping tent, the extra room and comfort are worth it, particularly if your camping vacation lasts more than a few days.

Yurts are built with the elements and surroundings in mind. Both in the wintertime and the summer, they can keep you comfortable. Less surface area of the living room is uncovered to the external temperatures because of its spherical form. Additionally, because the yurt’s curved edges allow the wind to flow around them rather than catching on the straight sides, there is less wind resistance. High winds, snow, and even disasters won’t damage yurts because of their durability.Yurt camping allows you to get the experience of staying in a Mongolian ger without having to go there. When you stay in a luxurious yurt, it may make your trip more opulent and is a pleasant alternative to tent camping. Yurts are very spacious inside and offer great weather protection. Although transportable, they are still not as small as a contemporary tents. They would make a great base camp for extended camping vacations, but they might not work as well if you intend to do a lot of trekking while carrying your shelter.Many yurt manufacturers produce these buildings for both long-term installations and yurt camping trips. The leading American manufacturer/retailer of yurts that you may hire for your very own glamping excursion is www.Dyester.com  for your perusal.